I made this for a baby shower potluck lunch at work yesterday. Very simple and good for a big group – but my wild rice salad came out looking nothing like the photo in the original recipe! The kind of rice I used (Lundberg Black Japonica) turned the entire thing dark purple. If you don’t want a dark purple salad, cook your white rice and wild rice separately, or buy normal wild rice that doesn’t “leak” color into the water.

Also, I substituted vegetable broth instead of chicken broth, since there are lots of vegetarians where I work. This actually makes the whole dish vegan, and you can make it gluten free by making your own broth or buying one that is labeled gluten free. 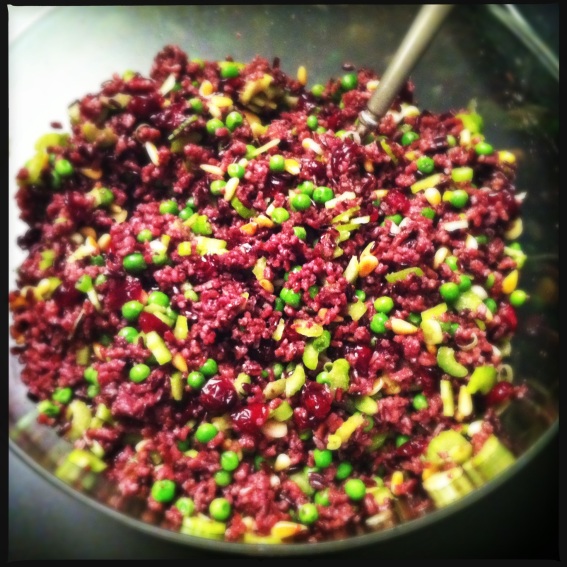 I originally invented this extremely simple but satisfying recipe in October for my gluten-intolerant friend Erin, who suggested that I make breadcrumbs for baked fish out of rice-based products rather than bread-based products. In October we made it with snapper and the “breadcrumbs” were a mix of crumbled rice crackers, rice krispies, and spices.

Due to an unexpected plethora of rice krispies in my kitchen (I made white chocolate rice krispy peanut “snowflakes” for New Year’s Eve dessert), I decided to make the fish dish again, and decided that “Rice Krispies Fish” wasn’t a very appealing name. “Snap Crackle Cod” was soon born.

I took wild cod filets and coated each side with olive oil. Next, I filled a ziploc bag with rice krispies and crunched them up a little for some texture variety. I added a little of whatever spices I could find lying around – basil, thyme, oregano, rosemary, salt, fresh pepper, and cayenne, and then poured the mixture over the filets and sprayed a light coating of olive oil over the top. Bake at 375 for about 20-25 minutes depending on the thickness of the fish, and voila! Snap crackle cod. (Served here with my mom’s recipe for whiskey-braised leeks and a squeeze of lemon).

“Black Bean Brownies.” When I say these words together, people look at me like I’ve just offered them skunk on a skewer. Even my friend Tim wrinkled his face in disgust (over our vegan Thai dinner at Dao Palate last night) as I exclaimed that those were my project for the next day. But I’ve seen a lot of recipes for them and wanted to give them a try. After all, if avocado chocolate pudding was good, why not black bean brownies? And they’re gluten free (the beans act as a substitute for flour) and I’ve been promising my gluten-intolerant friend Erin some gluten-free recipes for some time now.

So, in my search for recipes, of course my favorite blog had just what I was looking for. Almost. The original recipe is here but I altered it quite a bit. See, I didn’t want to make a “healthy” brownie and then throw in a whole stick of butter. I’m sure it tastes amazing with a whole stick of butter, but it wasn’t quite as guilt-free as I wanted. So I did some research on butter substitutes in baking, and found out that if you’re baking something dark colored (like brownies), pureed prunes and maybe a touch of oil will substitute nicely. It was worth a shot. If the brownies were a disgusting mess, I’d just throw them out and try again with butter. Or oil. The other issue is that I don’t own an 11 by 18 inch baking pan – only 9 by 13 and smaller – so I divided the whole recipe by 3/4. So much room for disaster and failure it’s ridiculous. Substituting butter with prunes, using the wrong size pan, making 3/4 of the recipe (not even a nice round 1/2!), leaving out the walnuts (personally I like them, but I planned to give some of these to other people and some people aren’t nuts about nuts in brownies) and using espresso instead of coffee substitute. The whole time I was making them I couldn’t help thinking “these are going to be gross… so gross.”

Taste tester #1: Me! (come on, I’m not feeding crazy hippie brownies to other people without trying them first). NOT gross. Good! You can’t really taste the beans or prunes. I think the addition of the coffee is a crucial to mask the flavor. And as someone pointed out on Heidi’s blog, you could also add peanut butter if so inclined. They are fudgy, rich, and dense, just like brownies should be. They do taste kind of health-food-y… but, well, they are.

Taste testers # 2 and 3 will weigh in later… updates to follow.

(Side note: I felt it was my blogging duty to add a warning label. One probably should not consume too many of these at a time. Beans and prunes… both well known for their “digestive benefits.”)

Caviar with a conscience

Check out my mom's eco-friendly caviar business - and maybe buy some!
Pointy Snout Caviar is made by hand from sustainably farmed White Sturgeon roe. It is chemical-free and honestly labeled for date of harvest and provenance.