I really have no excuses for this recipe. I didn’t make pumpkin pie for thanksgiving and have lots of leftover cans of pureed pumpkin. I didn’t have real pumpkins lying around. I didn’t go to the farmers market. It’s just fall and I wanted pumpkin soup for lunch! 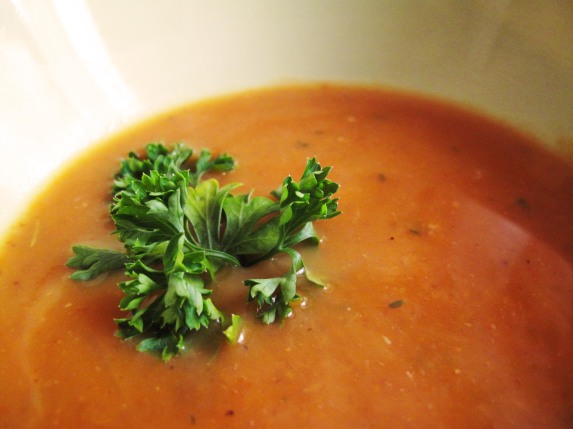 Pumpkin soup is super easy, especially if you used canned pureed pumpkin (if you’re going this route, make sure you get just plain pureed pumpkin, not pumpkin pie mix!). If you feel like roasting, scooping out, and pureeing a whole fresh pumpkin, go for it. Whichever way you get your pureed pumpkin, take about 4 cups of it and throw it in a pot with 6 cups of chicken stock (yes, homemade would be nice, but a nice store bought kind works if you’re pressed for time). Add a roughly chopped onion, a clove of garlic, 5 or 6 whole peppercorns, and 1/2 to 1 teaspoon of fresh thyme. Bring it to a boil, then reduce and simmer for 30 minutes. Take it out in batches and puree it, or use one of those handy hand blenders right inside the pot if you have one. Then simmer for another 30 minutes and add any other spices you want to taste – salt & pepper, maybe a pinch of nutmeg, cloves, and ginger, or curry or cayenne. This soup can go many different ways. You can also add a splash of half and half, milk, or cream at the end, if you want a creamier soup. I’ve also heard of adding peanut butter to make a peanut pumpkin soup… hmm, and WHY haven’t I tried that yet?! I don’t normally run back to the kitchen mid-post, but let’s do this right now.

Ok, I just separated a small batch of the soup, added a touch of peanut butter (the all natural unsalted organic kind, where the only ingredient is peanuts), took one bite, and added some pb to the rest! I didn’t go overboard – probably 1/3 cup of peanut butter went into the soup pot. I was a little worried that the thyme would clash with the taste, but it actually made it a much more interesting flavor. Doesn’t peanut butter make everything better?

Caviar with a conscience

Check out my mom's eco-friendly caviar business - and maybe buy some!
Pointy Snout Caviar is made by hand from sustainably farmed White Sturgeon roe. It is chemical-free and honestly labeled for date of harvest and provenance.